How #digitalhealth is changing doctor-patient relationships 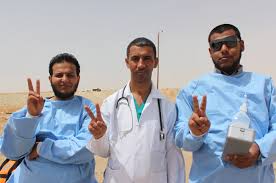 A few days ago, I was skimming my Twitter feed when I saw a post from a major academic medical center. The post, which showed off a group of the center’s specialists, featured five forty-something men and women, grouped in a “C” and dressed so casually that they looked like they were taking their dogs for a walk. (Sort of a “Friends” look, if you ignored the thinning hair and scattered wrinkles.)

Even five  years ago, you would never have seen a hospital present their specialists to the public in such an informal manner. No, the men would have been wearing dress shirts and ties, and the women business-like dresses and carefully conservative jewelry, capped, of course, by white lab coats. What’s more, they would have been posed with some sitting and some standing, all staring at the camera rather than paying any attention to each other, a display of powerful experts rather than people.

What a difference a few years of digital health evolution can make.

Today, with mHealth tools and social media putting patients into direct, sometimes intimate contact with their doctor or NP, providers are being nudged into the direction of exposing more of their actual selves rather than hiding behind that white coat.

While they still need to be careful what they say on medical topics, many providers are developing a more casual professional style, a development which is nearly inevitable as they spend increasing amounts of time in the same social sandboxes as patients.

Also, given the way apps, digital health tools like telemedicine and social media work, providers stand a chance of encountering their patients digitally 24 hours a day, rather than living in a completely separate world. This, too, lowers the barriers between doctors and patients, turning doctors into trusted advisers rather than stern scientists whose word is never to be challenged.

This trend is likely to expand in the future as patients are given some of  doctors’ minor superpowers, such as doing their own lab tests or conducting their own ultrasound with a smartphone-connected reader. True, patients have gradually been demanding more power in their medical relationships for quite some time, but with technology leveling the boundaries, the pace of change should accelerate.

Admittedly, both the patient and the doctor will probably go through some difficult moments as they shift dance steps. But if both sides are willing to keep dancing, change will come.

P.S.:  We’d be just tickled if you would take three minutes and  answer our short survey on  health IT content at https://www.surveymonkey.com/r/68RZB8Y